The UNI 3 spare cartridges are perfectly interchangeable and can be fitted indifferently to both Classic and Silver models of drinking water filters.

The duration of the filter cartridges is subject to the characteristics and quantity of water to be filtered, but it must not exceed 3 months. Anyway the recurrence of the unpleasant taste shows that the filtering action is running out.

The first time a new cartridge is used and when the water filter remains inactive for more than 48 hours, wash the active carbon by running at least two liters of water. It is advisable never to let flow hot water through the cartridge.

The practical and economical 4-cartridge package covers the need for one year of use.

The domestic equipment for the treatment of drinking water is not a  purifier but a water filter, capable of improving the organoleptic characteristics (smells, tastes, etc.) of aqueduct waters that already meet the chemical – physical and microbiological law requirements.

The advantages of the Uni3-b filter cartridge

Since chlorination is the system used for the disinfection of water intended for human consumption, one of its problem is the formation of “chloro-compounds", known to release bad smells and flavours to the potable water. The A-version spare cartridges resolve the above-mentioned problems, while in the B-version (Water filter + Water Softener) they reduce, in addition, the limescale.

While retaining the characteristics of A-version, the B-version reduces the hardness of the water by using (within the limits permitted by law) a mixture of carbon and resin: specific for limestone waters, it is a little less durable against chlorine.

The blend used for the B-version cartirdges is additived (according to law regulations) in order to avoid the proliferation of bacterial flora in case of prolonged non-use.

Structure of the water filter cartridge 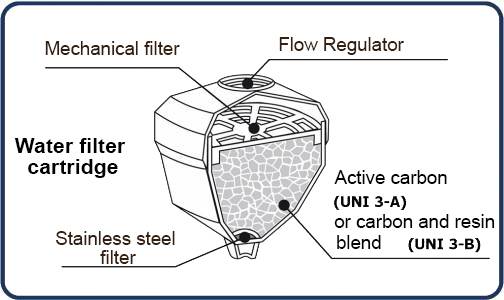 In the upper part of the cartridge, a flow regulator lets the optimum quantity of water flow pass so that the active carbon and resin blend action is fully exploited.

In fact the more slowly the water flows, the more effective the active carbon action is.

Inside the cartridge, the reduced flow is redistributed uniformly by a mechanical filter over the entire blend surface, in order to optimize filtering.

The flow of water from top to bottom takes full advantage of the entire volume of the carbon and resin blend, allowing it to absorb impurities and chlorine in a homogeneous and effective way

Servicing your house and garden since 1963